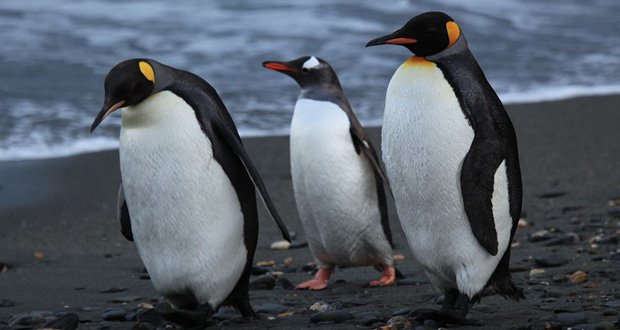 21. A 96-year old lady from Australia knitted over 1000 tiny sweaters for penguins to protect them from oil spills. – Source

22. Pigeons, Penguins and Flamingos don’t feed their newborn young regurgitated food but instead puke up their own cells from the crop and esophagus made specifically to feed young. The sloughed cells have more protein and fat than mammalian milk. – Source

23. There is a German engineering company named Festo that designs swimming underwater robots that replicate the movements of animals using a “fluidic muscle.” They have working models of a penguin, a ray, a gull, and a flying manta ray blimp. – Source

24. Penguinone, an organic chemical compound, got its name from the fact that its molecular structure resembles a penguin. – Source

25. The Colonel-in-Chief of the Norwegian Army is a penguin called Sir Nils Olav – Source

26. Scientists can locate colonies of Penguins from space just by looking for dark ice patches of penguin poop. – Source

27. Penguins use supercavitation–a cloak of air around their bodies–to reduce hydrodynamic drag and swim faster underwater; fast enough to launch themselves up to three meters out of the water. – Source

30. Penguins emit their poop with four times more pressure than humans and practically shoot with their excrements. – Source

January 17, 2017
Latest Posts
Did you know?
Loading...
Facts of the Day
Registration is disabled.