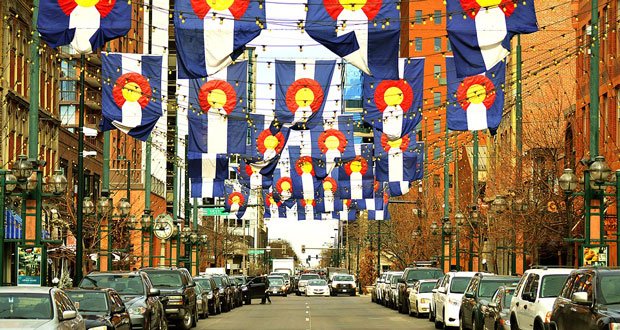 1. Denver International Airport (at 53 sq. miles) is larger than Manhattan, San Francisco, and Miami and is the 2nd largest airport in the world. – Source

2. Casa Bonita from South Park is a real place in Denver. There are even cliff divers. – Source

3. The first arrest for Marijuana possession and selling occurred in Denver, Colorado on October 2, 1937. – Source

4. The Blue Mustang statue, nicknamed Blucifer because of its glowing red eyes, in front of the Denver International Airport killed its creator in 2006 when its head fell on him and severed an artery in his leg. – Source

5. There is a restaurant in Denver that does not have set prices or a set menu. They encourage you to pay what you can, and If a diner does not have sufficient money to leave, they are encouraged to exchange an hour of service. – Source

6. Denver, Colorado is named after the first Governor of the Kansas Territory because the city was in the territory. – Source

8. The Denver police use a Smelloscope to find pot smokers that don’t comply with the Denver odor ordinance. – Source

9. At the 2008 Democratic National Convention in Denver, undercover detectives were used to investigating violence against the Police. The Police later pepper sprayed their own undercover agents. – Source

10. In 1890, Congress passed a bill turning Denver’s first cemetery into a park. Family members were given 90 days to remove the remains. The undertaker responsible for transferring the unclaimed bodies then used child-sized coffins. Hacking limbs from the remains so they would fit. – Source

11. The Denver Police Department caused the largest police scandal in US history in the 60’s. Nearly fifty members of DPD were part of a robbery racket, stealing from dozens of businesses they were assigned to protect. It was not discovered until a safe fell out of a police cruiser. – Source

12. In Denver, Colorado there is a bank called Young Americans Bank that lends money only to people under the age of 22. – Source

13. In 2005, Denver took people’s dogs and euthanized them if they resembled a pit bull. – Source

14. In the early 1920’s, a company out of Denver, Colorado sold radium suppositories that were guaranteed to enhance sex life. – Source

17. There is 45,000 sq. feet of underground tunnels and buildings in an abandoned Titan 1 missile silo located in Denver, Colorado. – Source

19. Denver was awarded the 1976 Winter Olympics but later turned them down because of overwhelming public opposition to the financial terms. – Source

20. There is a town in the heart of the Denver metro area that has only 8 people living in it. – Source

21. The University of Denver is still technically known as Colorado Seminary. – Source

22. Rabbits are the Denver equivalent of Futurama’s owls: a breeding nuisance. – Source

25 Uplifting Headlines of the Week - Part 57

November 27, 2017
Latest Posts
Subscribe to Blog via Email
Did you know?
Loading...
Facts of the Day
Registration is disabled.