Just a fair warning. These pictures and concepts aren’t particularly graphic, but they may make some people uncomfortable. I just want to stress that it’s important to know that these things REALLY happened to very REAL people it’s important to recognize the past, even the stuff that might make some of us uncomfortable. Thank you. Click here for part 1, part 2, part 3, part 4. 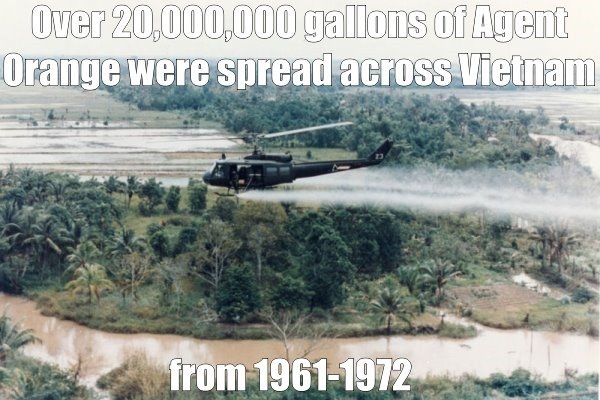 Agent Orange, or “Herbicide Orange”, was part of a strategy during the Vietnam War in which American troops would disperse millions of gallons of Herbicides in order to kill the foliage and farm lands of Vietnam.

“Operation Ranch Hand”, as it was called, lasted from 1961 to 1972. It involved the “Rainbow Herbicides”: Agents white, purple, pink, green, blue, and of course, Orange. It was called “Agent Orange” due to the orange band that was painted on the containers it was stored in, and was the most well known because it was over 60% of the total herbicide used. In the course of 9 years, over 20,000,000 gallons of herbicide were spread across over 4.5 million acres at least once. 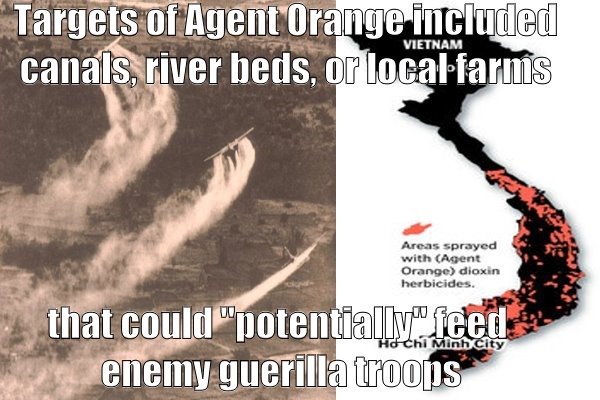 The primary targets for these herbicides were rivers, canals, dense forests, and also local peasants. The goal for attacking peasant villages was to decimate their food supplies, forcing them to then run to the U.S. controlled territories in Vietnam, limiting the secret base supplies of the enemy soldiers.

The irony, of course, is that the guerrilla soldiers rarely used local supplies, and hardly a fraction of any of the lands destroyed even affected the soldiers’ own supplies. 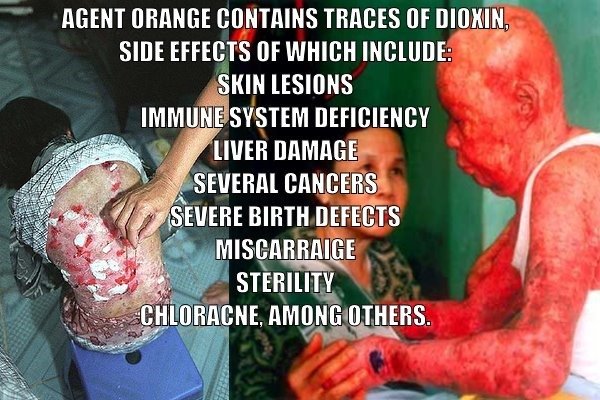 The major reason for Agent Orange’s disastrous consequences is due to the fact that it contains trace amounts of 2,3,7,8-Tetrachlorodibenzodioxin (TCDD), or as it is more commonly known, “Dioxin”.

Even miniscule amounts of Dioxin can cause severe side effects such as muscular dysfunction, cancer, miscarriage, and most notably, birth defects. 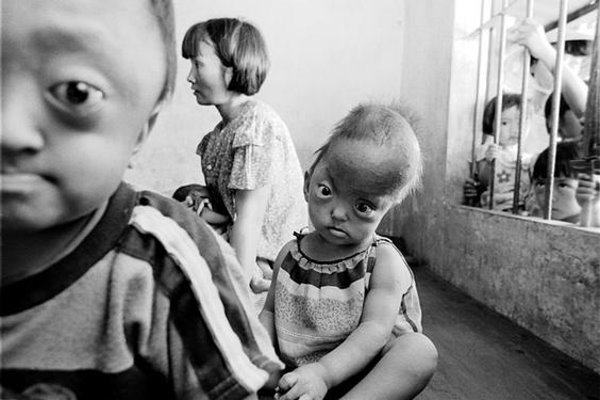 It is estimated that some 400,000 Vietnamese were killed or maimed due to the herbicide, with upwards of half a million children born with severe birth defects. The United States government, however, claims that these figures may be unrealistic. 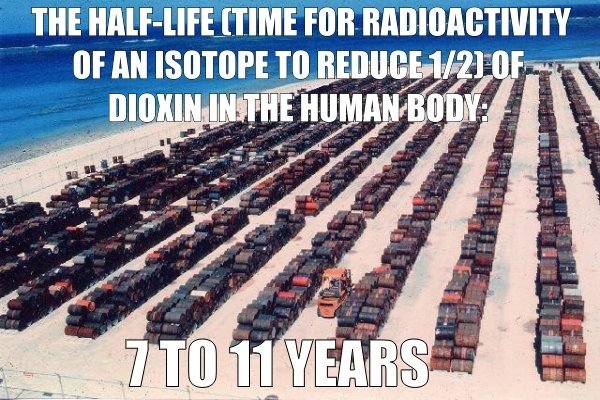 Another major concern with Dioxin is its ability to stay toxic for extended periods of time. The half life of Dioxin in the human body can last anywhere from 7 to 11 years, and in some cases upwards of 20 years.

And although sunlight tended to speed along the decomposition process of the toxins on the landscape, Dioxin found under the soil or in water sediments is said to have a half-life of over 100 years. 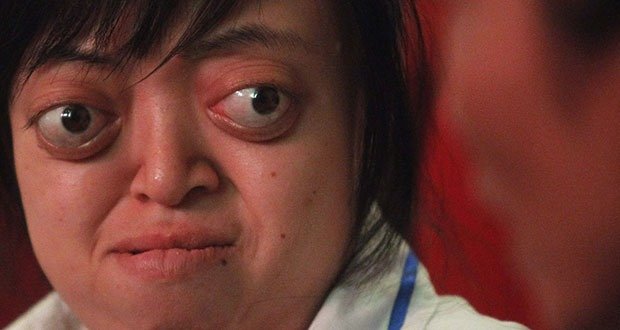 There have been many instances of Vietnamese victims filing suit against the United States Government, claiming that Agent Orange went against the rules placed by the Geneva Protocol. Enacted in 1928, it forbade the use of Chemical or Biological weaponry in international arm conflicts. The U.S. Government responded by stating that Operation Ranch Hand acted within the boundaries of the law, due to the fact that the chemicals were just HERBICIDES, and not chemical weapons.

Roughly 20% of Vietnam’s entire forested area was sprayed with these herbicides, killing off a significant amount of vegetation, forestry, and animal life in the process. 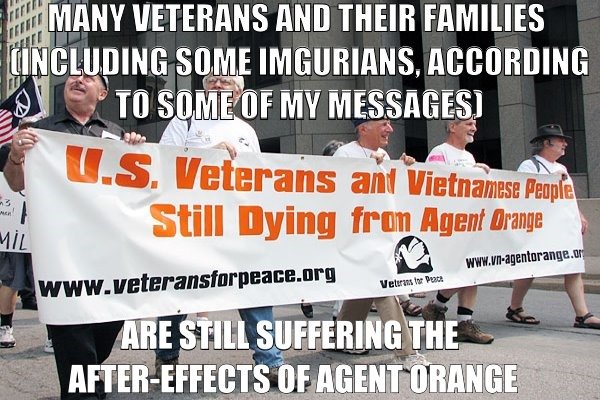 After the war, many soldiers (especially those in the Army Chemical Corps) complained of having severe after effects, including severe rashes, higher rates of birth defects, and several different forms of cancer. During the time period, it was insisted that the chemicals were “HARMLESS” and there was no need for concern.

A suit in 1984 resulted in companies who produced the chemicals (DOW Chemical and Monsanto in particular), who settled out of court to the tune of $184 Million dollars. These companies still hold firm to the position “a causal connection linking Agent Orange to chronic disease in humans has not been established.”

Here is a video of a soldier spraying Agent orange, with no protection whatsoever. In fact, he’s not even WEARING A SHIRT.

In 1991, Congress put in place the “Agent Orange Act” which gave the Department of Veteran Affairs the authority to compensate some Veterans affected by Agent Orange. 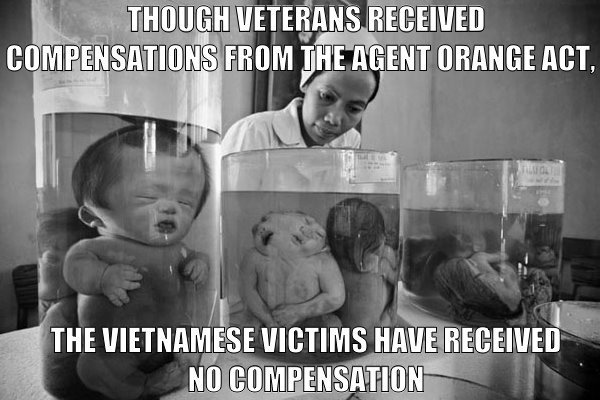 Although the Veterans have received some compensations for their suffering, the Vietnamese victims have yet to receive any such assistance. Along with the rejected suit against the chemical companies, a proposition was cancelled in 2005 that would have initiated scientific exchanges between the United States and Vietnam on the long-term health impacts of Agent Orange.

As of now, there has been no attempt to compensate or assist the Vietnamese victims of Agent Orange until 2007, when the “U.S. Troop Readiness, Veterans’ Care, Katrina Recovery, and Iraq Accountability Appropriations Act” included a staggering 3 MILLION DOLLARS for the detoxification of Dioxin hotspots in U.S. Military bases in Vietnam.

I know this information is difficult for some people (especially those of you that might have been personally affected by this disease).

I know this can be very lugubrious information, and it’s also very long, so many people might just skip over this entirely. But it’s important to remember that the atrocities of this world didn’t JUST happen overseas, but many also happened right here (for some of us) in the United States. It’s important to remember these things so we are able to better ourselves and ensure that we prevent terrible atrocities like this from happening again. Be good to each other. Thanks again!