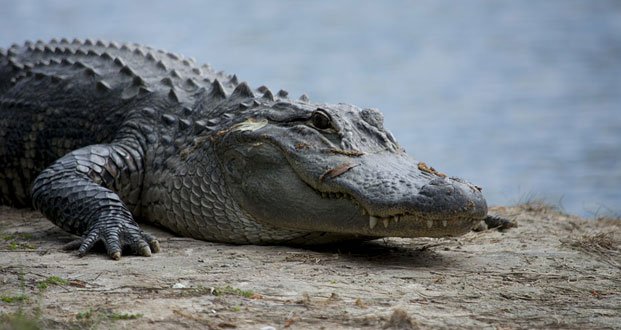 1. Alligators do not have sex-determining chromosomes. Instead, the sex is determined by the temperature of the environment the alligator is in. – Source

2. A man once jumped into alligator infested waters, screamed “F*ck you alligators” and was subsequently eaten alive. – Source

3. Alligators have been a long-running problem for NASA, including climbing over their fences and entering buildings overnight. – Source

4. Alligators in Louisiana have learned to balance sticks on their snouts specifically during egret and heron nesting season when the birds are actively searching for nest materials. This is the first known case of predators using lures based on seasonal prey behavior. – Source

5. Playing a B flat on a tuba arouses male alligators. – Source

6. Alligators are native only to the United States and China. – Source

8. Alligators are more closely related to birds than they are other species of reptiles. – Source

10. Alligators breathe only in one direction through their lungs. – Source

11. Smiley, an American alligator living at Gothenburg’s Maritime Museum, died after the heat was turned down in her pond to save money. – Source

12. Alligators can go without food for up to 3 years. – Source

13. In 2012, a Florida man had his hand bitten off by an alligator and he was later charged with illegally feeding the animal. – Source

14. Alligators have no finite lifespan, but continue to live forever unless affected by their environment. – Source

15. South FL is the only place in the world where alligators and crocodiles coexist naturally. – Source

16. Alligators can climb trees. They like to bask on rocks, but if there are no rocks available, they’ll climb a tree and bask on a branch instead. – Source

17. Alligators can make their heartbeat as low as 1 beat per minute (making a Python think he is dead and swallow him) the alligator may recover in ~13 minutes and fight from the inside of the Python which can be devastating to the snake. – Source

18. Alligators have a permanently erect penis. It is pushed out by two muscles contracting. There is no muscle in the penis, just collagen. – Source

19. In the early 1900s, the city of Chattanooga kept two alligators in a fountain to keep birds, dogs, and vagrants away. They were eventually removed because the fence was low and they would frequently escape. – Source

20. Only 12 alligators in the whole world have a rare genetic condition that reduces the color pigmentation in their skin. They are known as Albino Alligators. – Source

21. Alligator farms exist, where Alligators are raised for consumption. – Source

22. The world’s oldest known alligator, Muja, lives in the Belgrade Zoo and survived WWII, during which the Zoo was almost completely destroyed, and the NATO bombing of Yugoslavia in 1999. – Source

24. Male alligators make a rumbling sound so low it can’t be heard by humans and makes the water dance around them. – Source

25. Alligators’ teeth aren’t as sharp as other predators’ because they are made for crushing, not chewing. When their prey is too big to be swallowed whole, they stash carcasses away to be eaten once the flesh has rotted and is soft enough to eat. – Source