1. Before performing in Japan, the Beatles received an anonymous message: “Do not go to Tokyo. Your life is in danger”. 35,000 police officers were tasked to protect the group. The Japanese audience was so polite and quiet, they were able to hear how bad the live performance really was. – Source

3. The Beatles album, ‘Revolver’ was almost named ‘After Geography’ (credits to Ringo), to contrast with the Rolling Stones album, ‘Aftermath’. – Source

4. The Beatles trip to India ended badly because the Maharishi wanted the band to deposit up to 25% of their next album’s profits in his Swiss bank account as a tithe, to which Lennon replied, “Over my dead body”. – Source

5. A student sent John Lennon a letter stating his teacher was conducting a class analyzing the Beatles’ songs. This act inspired the song “I Am The Walrus,” as the whole purpose of the song, according to John, was to confuse, befuddle, and mess with the Beatles experts. – Source

6. Carl Sagan wanted to include the Beatles “Here Comes the Sun” on the golden record sent into space on the Voyager spacecraft. The Beatles said yes, EMI said no. – Source

7. The Beatles played a demo copy of “Sgt. Pepper’s Lonely Hearts Club Band” before its release at full volume from an open apartment window at 6 AM. Instead of complaining, the residents opened their windows and listened, aware they were hearing unreleased Beatles music. – Source

8. Weird Al intended to parody the Beatles “Free as a Bird” on his album Bad Hair Day. Paul McCartney gave permission for the parody, but since John Lennon wrote the song, he passed the decision on to Yoko Ono, who said no. – Source

10. Michael Jackson purchased the publishing rights to The Beatles song catalog for $47.5 million, against the advice of his counsel. 30 years later it was resold to Sony for $750 million, nearly a 1500% increase in value. – Source

11. The Beatles literally stopped touring because their music could not be amplified loud enough to compete with screaming crowd noise, even with custom, purpose-built amplifiers. – Source

12. After Bob Dylan offered The Beatles marijuana when he first met them in 1964 he was shocked to find out they weren’t regular smokers. Dylan had misheard the lyric ‘I can’t hide’ from ‘I want to hold your hand’ as ‘I get high’. – Source

13. When the Beatles wrote the song “With a Little Help from My Friends”, the first line ended with ‘What would you think if I sang out of tune? Would You Throw Ripe Tomatoes at Me?’, but Ringo changed it so that fans would not throw tomatoes at him should he perform it live. – Source

14. The Beatles song “Come Together” was written for Timothy Leary’s campaign for governor of California. His campaign ended after he was arrested for marijuana possession. – Source

15. The Beatles asked Stanley Kubrick to direct Lord of the Rings starring George as Gandalf, Paul as Frodo, Ringo as Sam, and John as Gollum but J.R.R. Tolkien wouldn’t let them do it. – Source 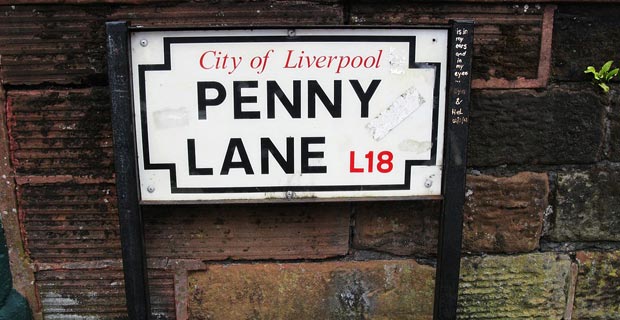 16. Due to the popularity of the Beatles song, “Penny Lane” street signs in Liverpool were so often stolen, local authorities got tired of replacing them and began painting the street’s name onto the sides of buildings. – Source

17. On August 29, 1966, The Beatles played what would become their last official concert as a band at Candlestick Park, San Francisco. The Park’s capacity was 42,500, but only 25,000 tickets were sold, leaving large sections of unsold seats. – Source

18. When the Beatles recorded “Hey Jude” Ringo was on the toilet and came back just in time to play the drums on the song. – Source

19. A reporter asked the Beatles about the intentions of the songs “Day Tripper” and “Norwegian Wood” after Time reported that they were about a prostitute and a lesbian. Paul responded with “We were just trying to write songs about prostitutes and lesbians, that’s all.” – Source

20. In “Hey Jude” by The Beatles Paul McCartney messes up and says “f*cking hell!” It’s audible in most versions. – Source