27. There is a bridge in NC with a clearance of 11’8″ that has destroyed dozens of trucks trying to pass under it. – Source

28. In order to dissuade Germans from invading, Julius Caesar built a bridge into their territory, marched his armies across, returned, then destroyed the bridge. The Germans got the message and never invaded. – Source

30. On May 2, 1845, a bridge in Great Yarmouth, England, collapsed when thousands gathered on it to watch a clown travel down the river in a tub pulled by geese. “400 people went into the river, 79 died, 59 of which were children.” – Source 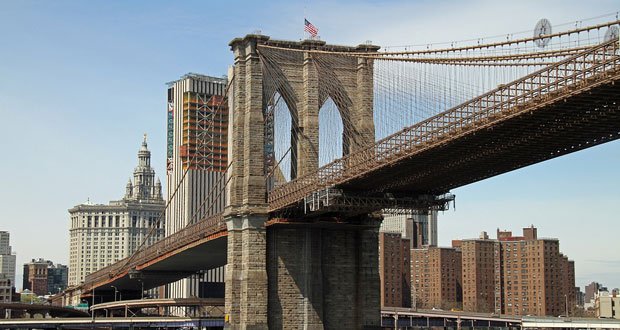 31. After the opening of the New York’s Brooklyn Bridge, a rumor came about that the Bridge was unstable and was going to collapse. To prove it was safe, P.T. Barnum led 21 elephants across it on May 17, 1884. – Source

32. Around 11% of USA highway bridges are considered structurally deficient. – Source

33. A man named Chen Si spends every weekend of his life at the Nanjing Yangtze River Bridge (the World’s #1 suicide site) and saves people from jumping.  – Source

34. There’s a zipper truck on the Golden Gate Bridge that shifts the median from one lane to another to increase traffic flow in either direction. – Source

35. Robert Moses, the extremely powerful New York City urban planner, hated the idea of poor people lowering the tone at the seaside, so he built low bridges over his parkways to ensure that only cars, not buses, could make the trip. – Source

36. George C. Parker, a con man, would sell the Brooklyn Bridge twice a week to tourists; the buyers would sometimes try to put up toll barriers. – Source

37. There is a water bridge across the river Elbe in Germany, it is 1km long, 34m wide and allows cargo ships to cross the river. – Source

38. Sri Lanka and India were connected as recently as the 15th century by a chain of limestone shoals known as “Adam’s Bridge”. – Source

39. There are hidden wine cellars that run beneath the expanse of the Brooklyn Bridge. Though no longer in use, they were created to help supplement the building costs as merchants would pay to store expensive bottles in the always cool vaults. – Source

40. There is a bridge in Scotland where dogs are known to commit suicide. In the past fifty years, over fifty dogs have visited the bridge and leapt to their death. It remains a mystery today. – Source