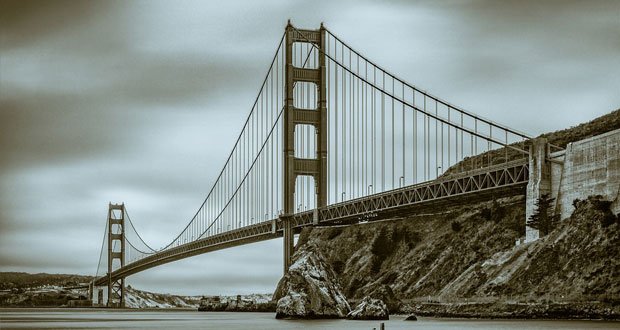 1. When building the Golden Gate Bridge, the lead structural engineer insisted on the installation of a safety net even though its $130,000 cost was deemed exorbitant. Over the four years of its construction, the net saved 19 men, who named themselves the “Halfway to Hell Club.” – Source

2. The five-mile-long Mackinac Bridge has a program that sends a crew member to drive people across if they’re too afraid to drive themselves. It gets between 1,200 to 1,400 calls every year. – Source

3. The first person to jump off the Brooklyn Bridge was a professional high diver who “wanted to demonstrate that people did not die by simply falling through the air”. He proved himself correct by falling 135 feet safely through the air, only dying when he hit the water. – Source

4. In an effort to reduce the high number of suicides on South Korea’s Mapo Bridge, it was unofficially renamed the Bridge of Life. It was decorated with positive affirmations and even sympathetic sculptures. Suicides increased sixfold the following year. – Source

5. People who survived suicide attempts by jumping off the Golden Gate bridge often regret their decision in midair, if not before. Said one survivor: “I instantly realized that everything in my life that I’d thought was unfixable was totally fixable except for having just jumped.” – Source

7. In 1848, to begin construction on the Niagara Falls Suspension Bridge, engineers needed to secure a line across the 800-foot chasm. The lead engineer held a kite-flying contest and eventually paid a local boy $5 for securing the first line over the river. – Source

8. The Euro currency was designed featuring imagery of fictitious bridges to represent architectural styles throughout time in Europe. They had to be careful not feature one country over the others, though, but the Netherlands then built the bridges in real life anyway. – Source

9. The largest natural bridge on Earth was virtually unknown to the rest of the world, until it was observed on Google Earth. – Source

10. Engineers in Canada receive an Iron Ring to remind them to have humility. It is in memory of a bridge that collapsed twice due to incorrect calculations involving iron. – Source

11. There are no bridges over the Amazon River. – Source

12. A guy showed up to the I-40 bridge collapse and took command of the federal disaster response by impersonating a U.S. Army Captain. He led the response effort for two days before fleeing. – Source

13. Albert Gunton is a London city bus driver who, in 1952 found himself driving his route crossing Tower Bridge when the bridge began to rise to allow a ship to pass. He accelerated and jumped the gap, and was awarded £10 for bravery. – Source

14. A German graffiti artist painted a 250 square meter bridge to make it look like it was made out of Lego. – Source

15. Hungary held a contest to name a Danube River bridge. Within days, “Stephen Colbert hid” (hid is Hungarian for the bridge) was number one in the poll with 17 million votes, seven million more than the population of Hungary. – Source

16. A bridge built in 2003 in Northern Costa Rica is colloquially known as “Backstab Bridge”. It was paid for, designed and built by Taiwan only for Costa Rica to cut off ties with Taiwan in favor of China. – Source

17. Soldiers are required to “route step” (or walk out of step) when crossing bridges because, in 1831, the rhythmic march of British soldiers broke a bridge, throwing soldiers off of the bridge. – Source

18. Bridges can be made from the roots of living trees. These Root Bridges takes at least 15 years to build, but is automatically strengthened over time and can last centuries. – Source

19. In 480 BC, King Xerxes I of Persia built bridges to invade Greece. But a storm destroyed these bridges. Enraged, King Xerxes threw chains in the sea, whipped the sea 300 times and burned it with red-hot irons as his men shouted at the water. The next bridge built was not destroyed. – Source

20. The Verrazano-Narrows Bridge is a bridge whose support towers are so tall and far apart that, due to the curvature of the earth, are almost two inches farther apart at the top than the bottom. – Source

21. The Lake Pontchartrain Causeway in Louisiana, the longest continuous bridge passing over water, is so long that for 8 of its 24 miles, you can’t see land in any direction. – Source

22. Engineers building a bridge between Germany and Switzerland found that when the two halves met their elevations differed by 54 cm. Germany bases sea level on the North Sea, and Switzerland by the Mediterranean; someone messed up the correction, doubling it instead of cancelling it out. – Source

23. In 1996, Woody Harrelson was arrested for climbing the Golden Gate Bridge to hang a banner protesting the destruction of the Redwood forest. – Source

24. One of the earliest weapons of mass destruction was used during the Siege of Antwerp in 1585. A Dutch explosive fire ship containing 4 tons of explosive rammed a fortified Spanish bridge, killing 800 Spaniards, causing a small tsunami, and vibrating windows 22 miles away. – Source

25. Just as the ribbon was about to be cut on the Sydney harbour bridge, a man in military uniform rode up on a horse, slashing the ribbon with his sword and opening it in the name of the people of New South Wales before the official ceremony began. He was promptly arrested. – Source