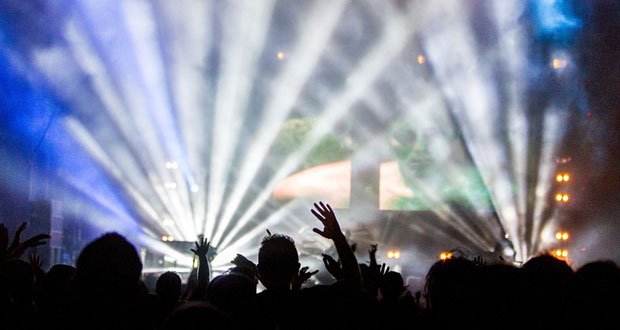 26. Anthony Kiedis once missed a Red Hot Chili Peppers concert because he was off scoring drugs, so Keith Morris filled in on vocals and just yelled and made up lyrics because he didn’t know any of the songs. – Source

27. In 1999, the TV, lighting & sound cables for Greenwich Park’s “Millennium Pop Concert” were laid by trained ferrets because it was impossible to use rods to push the cables through the tiny underground tunnels. – Source

28. Peter Grant, Led Zeppelin’s manager, is reported to have secured 90% of gate money from concerts performed by them. His trust and loyalty to Led Zeppelin were such that his managerial arrangement with the band was via a gentlemen’s agreement. – Source

29. At most of his concerts, Billy Joel gives his front row rickets away randomly to people in cheaper seats, so the front row isn’t filled with wealthy people, or “gold chainers,” as Joel calls them. – Source

30. Frank Zappa was invited to perform in Live Aid concert (to raise funds for relief of the Ethiopian famine) but he refused, calling the event “the biggest cocaine money laundering scheme of all time.” – Source

31. Nina Simone, aged 12, at her first concert debut at a classical recital, refused to play until her parents were allowed to sit in the front row where they sat originally before being told to move to the back to make way for white people. – Source

32. The song “American Woman” was made up on the spot at a concert. – Source

33. The famous “No brown M& Ms” clause by the band Van Halen was actually a very sophisticated method of quality control used in their concerts. – Source

34. In 1972, the band Deep Purple broke the world record for the loudest concert ever. Three audience members were rendered unconscious. – Source

35. Morrisey (a vegetarian) ordered all bags to be checked for meat on one of his concerts in 2011. In 1985, while promoting the album Meat is Murder, Morrisey walked out of the stage after a sausage was thrown in his direction. – Source

36. In 2006, Katie Melua gave a concert at 303 meters below sea level in one of the legs of the “Troll A” oil rig, earning a Guinness record for “deepest underwater concert.” – Source

37. Ryan Adams was once requested to play “Summer of 69” at a concert. Ryan then ordered the lights turned on, found the fan who made the joke request, paid him $30 cash as a refund for the show, ordered him to leave, and said he wouldn’t play another note until he’d gone. – Source

38. Garth Brooks stopped singing The Dance in the middle of his concert to give his guitar to a woman with cancer in the front row. She had a sign that said “Chemo this morning, Garth tonight. Enjoy the Dance.” – Source

39. Creed Bratton from The Office performs his own rendition of the show’s theme song at his concerts. – Source

40. During Tool’s concert at Garden Pavillion, owned by L. Ron Hubbard of the Church of Scientology, Maynard James Keenan “spent most of the show baa-ing like a sheep at the audience.” – Source

25 Uplifting Headlines of the Week - Part 70

February 26, 2018
Latest Posts
Subscribe to Blog via Email
Did you know?
Loading...
Facts of the Day
Registration is disabled.