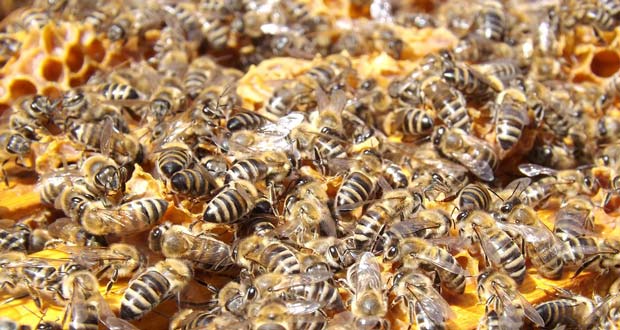 1. A honeybee has the same amount of hair as a squirrel that is around 3 million. Whereas the human head, as a comparison, has just around 100,000 hair. – Source

2. Japanese Honeybees will lure Giant Hornets into their hive. Once inside the honeybees will signal each other to swarm the hornet and then proceed to vibrate, raising the temperature up to 116° F (47° C). The honeybees can tolerate the heat but the Giant Hornet cant and is literally cooked alive. – Source

3. The Chili Peppers bassist, Flea, has become a beekeeper in an effort to stave off the declining honeybee population. – Source

4. One honeybee will make 1/12 of a teaspoon of honey in its whole life. – Source

5. Honeybees in France were feeding off discarded colored M&M shells, turning their honey to shades of green and blue. – Source 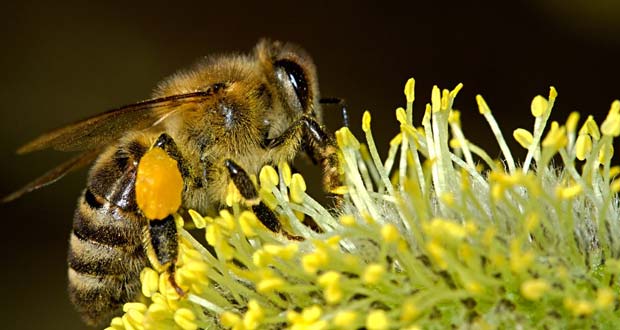 6. The estimated worth of global crops with honeybee pollination is around $200 billion dollars. – Source

7. The male honeybee’s genitals explode after they have sex. – Source

8. Autrian ethologist Karl von Frisch was nominated for the Noble Prize in 1927 for his work on deciphering the Waggle dance of honey bees. Using the Waggle dance, a bee communicates to other worker bees the direction and distance of the most productive flowers using the angle of the sun. – Source

10. Honeybees are not native to North America, they were an invasive species brought over from Europe in the 1600’s. Native Americans called them “white man’s flies.” – Source

11. Honeybees will eliminate their current Queen if she is getting old or not producing enough eggs by supersedure aka “cuddle death.” – Source

12. Honeybees that pollinate the caffeinated blossoms of the coffee plant can become addicted to the plant’s caffeine-spiked nectar. Other plants may be lacing their nectar with caffeine to pass off cheap goods. – Source

13. Honeybees use electrostatic force to move each other’s antennae at a distance. – Source

14. ‘Festooning’ is a process whereby honeybees hold onto each other bridging gaps between honeycombs. Scientists are unsure why they do this. – Source

15. Honeybees have a zero tolerance policy when it comes to drinking on the job and will attack any bee returning to the hive drunk on fermented sap. – Source

16. Honeybees use a system called “Range Voting” to hold seasonal elections and determine where to build their next nest. 90% of the time, the bees select the objectively best available candidate, as opposed to a 32% success rate for humans voting by plurality. – Source

25 Uplifting Headlines of the Week - Part 40