26. Jean, Nevada is the smallest town in the U.S., boasting a total population of 0. – Source

28. In 2020, Michael Heizer will have completed his almost 50-years-in-the-making sculpture, City. Located in the Nevada desert north of Las Vegas, costing over $25 million, it has been called one of the most ambitious art projects of the past century and a “monument to outlast humanity.” – Source

29. While filming the 1956 John Wayne film ‘The Conqueror’, 91 members of the around 220 team of cast and crew developed cancer as scenes were shot at an area 220 km downwind of the Nevada Nation Security Site, where nuclear testing had occurred years prior. – Source

30. There is a 1970s bunker home in Nevada that simulates night and daylight underground, complete with a suburban-style house, swimming pool, fake grass and trees and natural landscapes painted on all sides. – Source 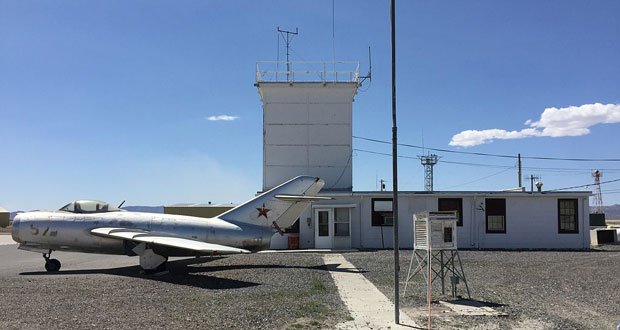 31. There is a public use airport in Nevada with airport code LOL. – Source

32. Nevada transmitted it’s entire Constitution to the U.S. Congress by telegraph, which cost $4,313.27 then and took 7 hours to transmit. – Source

33. The town of Palisade, Nevada staged gunfights and bank robberies during the 1870s to attract tourists. The true nature of the hoax was only known to the residents. In reality, due to its low crime rate, the town didn’t even have a sheriff. – Source

34. In Tonopah, Nevada there is a Clown Motel that shares a lot with an abandoned cemetery. – Source