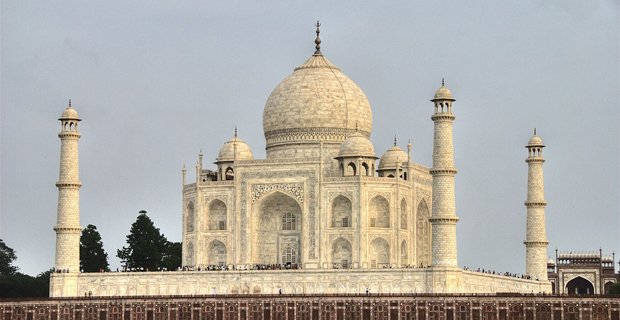 1. Natwarlal an Indian con man, repeatedly “sold” the Taj Mahal and Parliament House of India along with its 545 sitting members. He was sentenced to 113 years in prison, but he made daring escapes from different jails eight times in his life. – Source

2. During WW2 the Taj Mahal was covered with a huge scaffold to make it look like a stockpile of Bamboo and misguide any enemy bombers. (It was also camouflaged in 1971.) – Source

4. The four 40-metre tall minarets framing the Taj Mahal were designed to fall away from the precious tomb if they were to collapse. – Source

5. The largest Lego set is not from Star Wars or the Avengers, but a set of the Taj Mahal with almost 6000 pieces. – Source

6. It is believed that Shah Jahan planned to construct another Taj Mahal using black marbles on the other side of the river Yamuna which would be connected by a bridge to the original Taj Mahal, but he died before it could be completed. – Source

7. There is a cafe run by acid attack victims near the Taj Mahal. – Source

8. It took 20,000 men to build the Taj mahal that included sculptors from Bukhara, calligraphers from Syria and Persia, inlayers from southern India, stonecutters from Baluchistan, a specialist in building turrets, another who carved only marble flowers. – Source

9. The world’s once largest diamond, the Kohinoor, was inside the Taj Mahal and the British stole it when they conquered India. They haven’t returned it yet. – Source