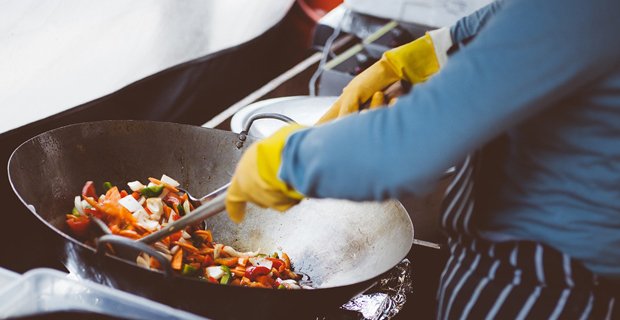 1. The “folds” in a Chefs Hat are meant to represent the many different ways the chef can cook an egg. – Source

2. Chef Boy-Ar-Dee is spelled that way so that Americans could correctly pronounce “Boiardi.” – Source

3. An Anaheim chef serves free pasta meals to “motel kids” whose families cannot afford permanent homes. The chef was inspired by his Italian mother who saw a child eating potato chips for dinner and told him in Italian, “You must feed them the pasta!” He has served over 270,000 meals. – Source

6. The first known pizza delivery was delivered by the most famous pizza chef in Italy to the king and queen in 1889. – Source

7. The prestigious Michelin Star, an award that the world’s best chefs work their lives to attain, is awarded by Michelin Tires. For over 100 years, it’s all been part of an advertising campaign to sell tires. – Source

8. Kim Jong-Il’s personal sushi chef escaped from North Korea in 2001 by telling the supreme leader he wanted to buy a sea urchin to cook for him. He subsequently wrote a memoir about his experiences with Kim Jong-Il. – Source

9. Celebrity chef Guy Fieri competed in the National History Fair as an 8th grader with a project about the History of the Soft Pretzel. – Source

10. When celebrity chef Jamie Oliver slaughtered a live lamb on television, he was praised by PETA for broadcasting it uncensored, as it “could turn the more diehard carnivore into a vegetarian”. – Source

11. The original Iron Chef came to the US, and Bobby Flay challenged Masaharu Morimoto. At the end, Flay stood on his cutting board, raising his arms in premature victory. Morimoto felt that tools are sacred to a real chef and criticized him, saying he was “not a chef.” Flay lost the battle. – Source

12. The potato chip was believed to have originated in 1853 when a chef had his fried potatoes sent back by an annoyed customer multiple times because the potatoes were “too thick”. He was fed up, cut the potatoes razor thin, and put extra salt on them. The customer, to his surprise, loved it. – Source

13. The executive chef of McDonald’s graduated from the Culinary Institute of America and was formerly a chef at the Four Seasons restaurant in Dallas, Texas. – Source

14. Chef Gordan Ramsay was once held at gunpoint for attempting to expose an illegal shark-fin black market. – Source

15. Chef Anthony Bourdain had a kitchen knife custom-forged from a Meteorite. – Source

16. In 1838, France and Mexico fought the Pastry War over Mexico’s refusal to pay 600,000 pesos to a French pastry chef whose shop had been ransacked by Mexican officers. – Source

17. Chef Eduardo Garcia received a bionic hand after losing his left arm when he prodded a bear cub laying on a concealed power cable. He says the accident helped his career as a chef. “I can grab things out of an oven and not get burnt. I don’t cut my fingers anymore.” – Source

18. Chef Thomas Keller once decided to kill & clean his own rabbits. The first rabbit screamed loudly. The horrific ordeal made him want to cook the rabbit perfectly. And taught him never to squander any ingredients. – Source

19. The chef of a sunken ship survived for 3 days under the ocean after taking refuge in an air pocket of the ship. – Source

20. As part of their final test, fugu chefs have to eat the fugu that they cut in the exam. – Source

25 Uplifting Headlines of the Week - Part 24

April 9, 2017
Latest Posts
Subscribe to Blog via Email
Did you know?
Loading...
Facts of the Day
Registration is disabled.