1. Washoe (chimpanzee) was the first non-human to use Amercian Sign Language. When Washoe’s caretaker returned to work after a miscarriage, Washoe ignored her. The caretaker then signed “My Baby Died”, to which Washoe replied “Cry”, simulating a tear running down the caretaker’s face. – Source

2. In 1974, Jane Goodall observed a social rift in a community of chimpanzees turn into a violent 4-year civil war for territory involving kidnapping, rape & murder, changing her perception of chimpanzees, it is known as the “Gombe Chimpanzee War”. – Source

3. A couple adopted a chimpanzee which learned to open doors, use keys, get dresses, water the plants, feed the horses, use a computer and drive their car too. But when he was 14 yrs old, he brutally attacked a family friend totally disfiguring her. – Source

4. A chimpanzee has been observed wearing a piece of grass into her ear, with no apparent function. After other members of her group started imitating her, researchers realized to be in presence of the first fashion statement observed in other animals. – Source

5. During a 1964 hoax, a Swedish journalist exhibited paintings done by a chimpanzee under the name Pierre Brassau. The journalist was testing whether critics could tell the difference between true avant-garde modern artwork and a chimpanzee’s work. They could not, and in fact, praised the works. – Source

6. The Western Chimpanzee displays very unique, humanlike behavior, making spears to hunt other primates, living in caves, diving in water for fun, and sharing plant food with each other. This has never been seen in any other chimpanzee species. – Source

7. When chimpanzee infants die, the mothers will continue to carry and groom the dead bodies until the mothers are able to move on. – Source

9. The most accepted theory on how AIDS was first transmitted to humans is that a Bantu hunter while processing a newly killed, and infected, chimpanzee, got cut himself and got the animal’s blood into his body. – Source

10. There was a chimpanzee who drank gin and tonics and masturbated to p*rn. – Source

11. Bubbles, Michael Jackson’s pet chimpanzee, attempted suicide after being removed from Neverland Ranch for being too aggressive. – Source

12. In 1990, a man jumped into a Detroit Zoo Chimpanzee enclosure to rescue a drowning chimpanzee. – Source

13. After 6.5 million years of separate evolution, the differences between chimpanzee and human are ten times less than those between rats and mice. – Source

15. A Soviet scientist, that pioneered artificial insemination, attempted to create human-chimpanzee hybrids by injected human sperm into female chimpanzees. After failing, he had plans to inject ape sperm into human females but was arrested and stopped in 1930. – Source

16. Nim, the chimpanzee taught ASL in the 70’s, would sign, “Stone Smoke Nim” when he wanted to smoke marijuana. – Source

17. One of the main attractions in Pyongyang is a chimpanzee that smokes a pack a day. – Source

18. There is 2-3 times more genetic diversity within the wild chimpanzee population on a single hillside in Gombe than in the entire human gene pool. – Source

19. There was once a chimpanzee that preferred to walk upright, was bald, preferred the company of humans and even showed sexual attraction towards them. Due to his human-like features and mannerisms; he was known as “Humanzee”. – Source

20. Ebola has also devastated Chimpanzee and Gorilla populations, including killing a third of all Gorillas. – Source 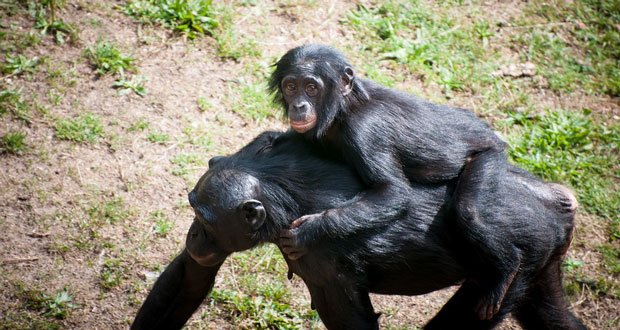 21. Chimpanzee babies are cognitively more developed than human babies until the age of six months. – Source

22. The wounds on a woman whose face and hands were mauled by a chimpanzee were so gruesome that the doctors and nurses who treated her received psychological counseling. – Source

23. In the early 1900s, a French scientist transplanted executed criminal testicles into millionaires for hormonal effects, and when demand became higher than supply he used chimpanzee testicles. – Source

24. There is a species of ape called the Bondo mystery ape which could be a population of chimpanzee and gorilla hybrids, displaying traits of both genera. – Source

25. In 1912, a man found the skull of a prehistoric “missing link” in the human evolutionary chain. In 1953, it was discovered that the skull was that of a medieval human with an orangutan jaw and fossilized chimpanzee teeth. “The Piltdown Man” become the most famous paleoanthropological hoax ever. – Source