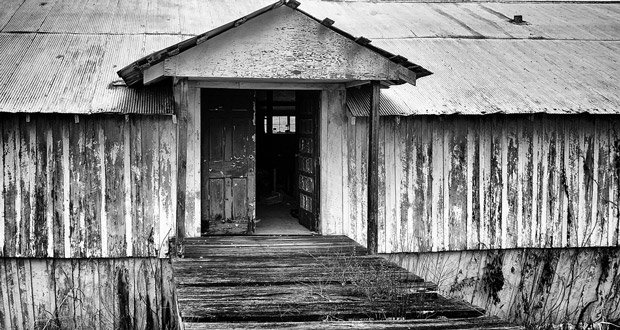 11. A lonely abandoned shack with a bunch of arrows pointing to it. Saying come in!

12. I don’t know if this is really scary, but it definitely freaked me out for a moment.

Driving home from grad lab for a couple of hours of sleep, about 4 in the morning (longish, time-sensitive experiment), not dawn yet, still pitch black. Turn a corner, and suddenly, someone runs into the street right in front of my car and….stops. I stop.

Cautiously, I try to drive around.

They scream, run up and slam their hands on the hood of my car. With them so close, I realize they are totally naked and filthy.

They stare at me for a moment, then proceeds to run in wide circles, kinda listing to one side than the other, in front of my car.

After about two minutes of this, he lists hard to one side, far enough I felt safe quickly driving around them, very wide, on the other side that was now open.

13. Frogs everywhere. Like hundreds of frogs all over the road.

14. I was following a grey Toyota Tundra in a massive blizzard through Montana on McDonald pass. He was going pretty quick most of the way but must have been unfamiliar with how steep the final few miles are. He got away from me as I slowed down to about 35. Not 5 min later I passed his tire marks in the fresh snow that went off the side of the mountain. Pulled over and looked down to see his truck upside down and on fire about 300 yards down.

15. Dad was driving at night, and I was looking out the window and saw two red pinpricks in the cornfield, and it followed us. I told my dad about it and he said, in the calmest, casual tone for this situation:

“Those are cornfield demons. Stay in the car and you’ll be okay.”

Cue me freaking the hell out when he got out of the car not too long after to check a tire before getting back in.

I’m still not sure if that was an actual thing or if he was using a situation to his advantage to teach me to not do anything stupid like that at night. Either way, it worked, and I STILL have no idea what those two pinpricks were. 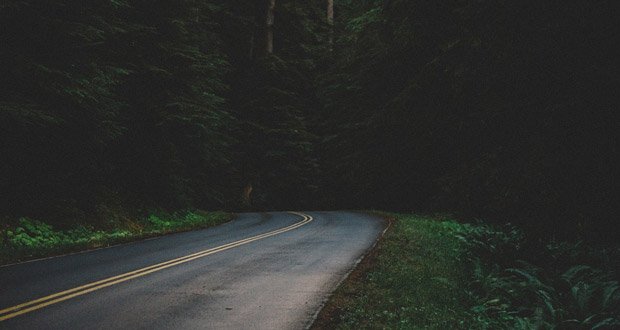 16. I was fetching someone from his workplace. Had to go through some fields, and some parts of the road were dark. I saw a thin, long object, wiggling at an upright position at the side of the road in front of me. Totally freaked me out. I thought I was finally experiencing something extraordinary. As I got closer I realized it was a tail of a cow. It must’ve escaped from some field and was hanging around at the side of the road. The cow itself was black, the tail slightly lighter in color. That’s why I only saw the tail moving first without seeing the whole cow first.

17. I got off on my exit, and the whole road was covered in blood. I put on my brights and saw a bisected body of a large animal. It just made me so sad.

19. A body in the ditch. Thought it was a deer as I approached and then my brain was like “Deer don’t wear boots”. I was shaking as I did a U-turn to make sure the person was alive. They were, just drunk and some people stopped as well and emergency was called. I was so shaken up by it.

20. Killer Clown on the side of a deserted country road during the 2016 clown apocalypse. I think I cried. 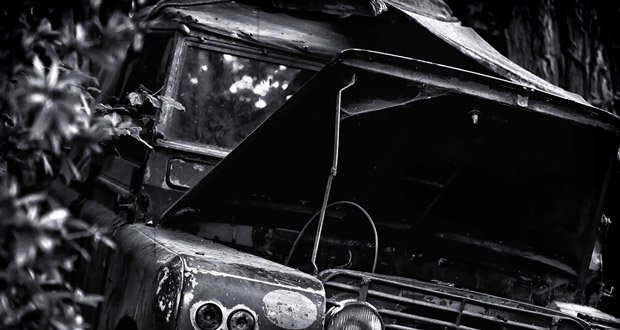 21. Someone I knew locally came across a jeep that had just crashed into the ditch on a highway at night, flipped on its top, wheels still turning kind of thing.

He was the first on scene so-called 911 and ran down into the ditch. The driver, who was badly mangled, had been tossed from the car and was dying. This guy held him and the driver died in his arms.

The weirdest part of it all was that he found out the next day that it was his cousin, but he hadn’t been able to recognize him.

22. I was a very young woman driving home after clubbing, about 2 am through Hollywood. I was pulling up to a stop sign on Cahuenga, about 3 blocks from Hollywood Blvd., when a bunch of guys begins to casually stroll onto the crosswalk, coming from both sides.

I hit the gas and ran the stop sign without even thinking. They cursed and ran after me, but those boys were ready to jack me. My instincts took over before I even realized what was happening.

23. I dropped my GF off the night we saw The Mothman Prophecies. It wasn’t a super scary movie, but it had some scares. I take the interstate home. On the way, there is a curve where there aren’t any lights. Just a dark stretch of interstate.

As I came around the bend, there was a guy in a black trench coat walking along the side of the road. As it was about 3 am, I guess I started him. So, when my headlights hit him, he whipped around and I swear he stared me right in the eyes.

My heart jumped into my throat. The whole event lasted maybe 2 seconds tops, but it had my heart racing. Not paranormal, but definitely scary for me.

24. Driving down a 2 lane divided highway. I came up to a couple of semis and went into the left lane to pass. I did a shoulder check to get back into the right lane when I saw headlights in front of me.. in my lane. The car was going the wrong way.

I managed to swerve into the ditch, felt like I was mere centimeters from death. Thought my wife’s scream would be the last thing I ever hear… And I never want to hear it again. The semis I passed all pulled to the shoulder to come to check on us. Didn’t see the car anywhere… I think they just kept going.

Had to pull into a gas station after and collect myself.

Driving home one night from my fiancé’s house, a normal night on the Florida highway.

It’s pretty dark, not too many lights, cruising at around 75 headed over a slight hill, just big enough that you can’t see the other side.

Get to the top and start making my way down the hill, and very suddenly in my headlight view I get a giant construction vehicle with all of its lights TURNED OFF, AND PARKED IN THE LEFT LANE OF THE HIGHWAY.

I really, seriously, pray to God that no one hit that parked construction vehicle (it was one of the ones that dig up dirt I think?) on the highway that day. I very, VERY narrowly avoided smacking right into the back of that thing. I don’t know how the Cherokee I was driving at the time handled the sharp turn I made into the right lane to avoid the vehicle. Needless to say, I was very nearly dead.

Immediately called Florida highway patrol and told them about it. I hope they got to it before someone got hurt, and I REALLY hope someone at that construction company lost their job. Because they could have killed multiple people.