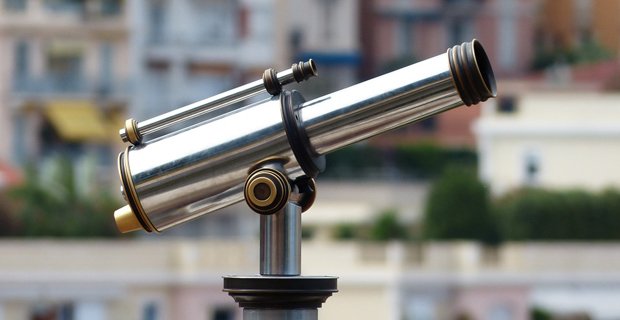 1. It has been theorized that the Pillars of Creation, made famous by the Hubble Telescope, may no longer exist. They may have been destroyed by a supernova shockwave around 6000 years ago, but the light from this hasn’t reached Earth, so we won’t see it for another 1000 years. – Source

2. Pope Paul VI spent the night of July 20,21 1969 watching the moon through a telescope of the Vatican Observatory during the first moon landing. Afterward, he praised the achievement by writing at length about the event. – Source

3. Einstein and his wife once visited the enormous Mount Wilson Observatory with astronomer Edwin Hubble. When told that Hubble’s telescopes were revealing the ultimate shape of the universe, Einstein’s wife nonchalantly responded, “Well, my husband does that on the back of an old envelope.” – Source

4. A Minister from Australia has visually discovered more supernovae than any person on Earth. Through mostly small backyard telescopes he has memorized the starfield foreground and position of 1500 galaxies. – Source

5. Astronomer Percival Lowell believed that he was the first person to observe canals on Venus, but because of a faulty adjustment of the eyepiece of his telescope, he was, in fact, looking at the blood vessels in his own eye. – Source

6. There is a mysterious dwarf planet between Mars and Jupiter called ‘Ceres’ which has never been visited by spacecraft or photographed in detail, however, Earth-bound telescopes reveal a large bright shining spot on the surface of this planet, the origin and nature of which are unknown. – Source

7. The JWST telescope is launching in 2018, it is 100X more powerful than Hubble, and will be able to see the edge of the observable universe. – Source

8. When astronomer Fritz Zwicky, father of dark matter, was banned from using the 200 inch Palomar telescope, he replied by calling them “a load of spherical b*stards” because he explained, they are b*stards no matter which direction you look at them from. – Source

9. Jack Black’s mother was one of the engineers who helped design the Hubble Space Telescope. – Source

10. There exists an image of Columbia space shuttle reentering atmosphere just before it disintegrated. It was snapped casually by people in Kirtland Air Force Base testing their tracking telescope.You can see debris stream out from the left wing. – Source

11. NASA and the German Aerospace Center shoved a big ass telescope inside a 747 so it could work above the clouds. – Source

13. Two former U.S. astronauts started an organization, independent from NASA, dedicated to launching a telescope called “The Sentinel” that will orbit the Sun and detect any Earth-bound asteroid threats up to decades in advance. – Source

14. China has a telescope on the moon. – Source

15. Instead of the traditional gifts of a watch and pair of long pants, rocket scientist Wernher Von Braun’s mother gave him a telescope for his Lutheran confirmation, sparking his passion for astronomy. – Source

16. Europe is building a telescope that will produce images 15 times sharper than the Hubble Space Telescope, possibly enabling it to observe Earth-like exoplanets. First light is planned for 2024. – Source

17. Astronomers polished a 25-meter mirror for the Great Magellan Telescope so smooth that the largest bump is .0003 times the width of a human hair. – Source

18. Ball, the maker of the glass mason jars, is making the mirrors for the James Webb telescope and made the optics for Hubble.Also, they are one of the biggest defense contractors. – Source

19. The James Webb Telescope is so sensitive that it can detect heat generated by a bumblebee as far away as the Moon. – Source

20. On January 7th, 1610 Galileo Galilei improved the telescope’s design and used it to study Jupiter. He discovered 4 of Jupiter’s moons and helped disprove the Ptolemaic world system(Earth-centric universe) theory. – Source

April 13, 2017
Latest Posts
Subscribe to Blog via Email
Did you know?
Loading...
Facts of the Day
Registration is disabled.