2. There is a lake filled with jellyfish, completely harmless due to lack of predators to defend against. – Source

3. Jellyfish should be kept in cylindrical tanks because they can get stuck in right angled corners. – Source

4. In 1870 a Lion’s Man Jellyfish washed up onto Massachusetts Bay with tentacles measuring 120 feet (37 meters) making it larger than a blue whale. – Source

5. Since jellyfish are 98% water, they evaporate in the sun. – Source

6. There’s a species of jellyfish that cannot die of old age. It achieves this by aging backward after sexual maturity, going through reverse puberty so it can start the cycle again. It is called “the Immortal Jellyfish,” and it can repeat the cycle indefinitely. – Source

7. Box Jellyfish venom is so powerful, human victims have been known to go into shock and drown or die of heart failure before even reaching shore. – Source

8. Jellyfish eggs are fertilized by the male’s sperm in the female’s mouth. – Source

9. In 2008 a California nuclear plant was taken offline due to “a rapid influx of jellyfish”. – Source

10. In 2011, scientists successfully transplanted jellyfish genes into cats causing them to glow a fluorescent green from birth. – Source 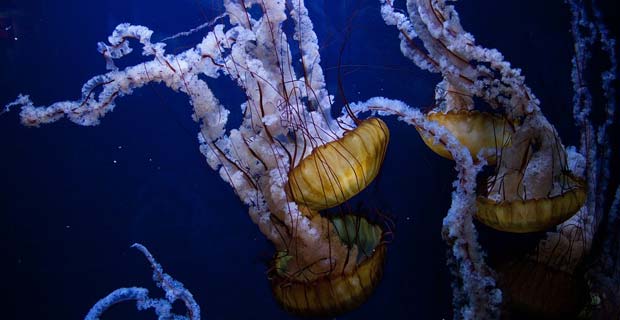 11. Jellyfish have existed for over 500 million years, making them the oldest multi-organ animal. – Source

12. Urinating on a jellyfish sting actually makes the pain worse, instead of helping. – Source

13. The Irish word for jellyfish is Smugairle Róin which means ‘seal’s snot’. – Source

14. Cannonball jellyfish shoot sperm out of their mouths and onto the mouths of other jellyfish. – Source

15. All jellyfish are technically plankton.- Source 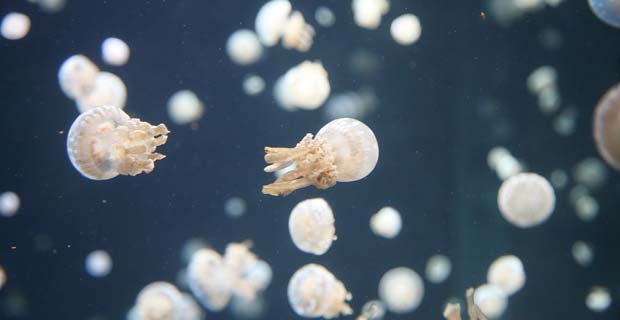 17. A group of jellyfish is called a Smack. – Source

19. There is a species of jellyfish that uses photosynthesis for food, thanks to the algae living in their tissue. – Source

20. Freshwater jellyfish can be found in the Ohio and Tennessee River. – Source

21. Frank Zappa has a species of Jellyfish named after him and was so named because the jellyfish expert wanted to meet Zappa. – Source

22. The stinger of a jellyfish is the most efficient mechanism of hunting by infecting toxins at 5.4 million g of force in 700 nanoseconds thousands of times per second. – Source

23. There are massive jellyfish near Japan. Their diameter can reach nearly 6 feet, and they can weigh over 400 pounds. – Source

24. Jellyfish skin can be used to make leather. Designer Yurii Kasao has developed a material derived from jellyfish that offers an alternative to using “cow” leather in accessories and small goods. – Source

25. An Israeli company is developing diapers and feminine pads made from processed jellyfish. – Source

26. Jellyfish contain a protein which causes them to glow when exposed to blue light. This protein has been introduced to other animals over the years, and scientists even created a green glowing bunny named Alba. – Source

28. The first man to swim the length of Great Britain grew a beard to stop jellyfish stinging his face. – Source