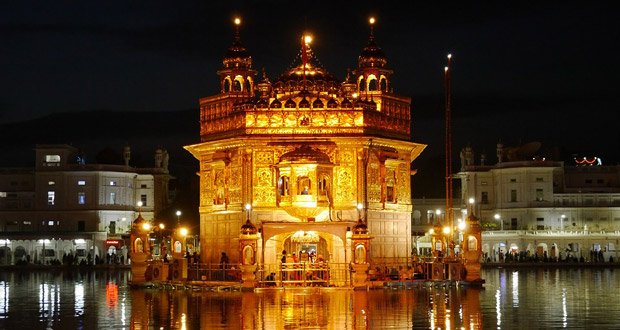 1. Anybody can walk into a Sikh temple after prayers and partake of the free communal meal called langar. The meal, a symbol of equality and community is given to anybody who wishes to partake, without any expectation of payment. – Source

2. The ruins of a 2,300-year-old Mayan Temple in Belize were destroyed by contractors who wanted to use the bricks for gravel to build a road. – Source

3. One of the seven wonders of the world, the Temple of Artemis, was burned down by an arson who wished to be famous for his crime. Following his execution, the Ancient Greeks made it an offense subject to the death penalty to mention his name. – Source

4. The Satanic Temple held a “Pink Mass” ritual over the grave of the mother of Fred Phelps – the founder of the Westboro Baptist Church. The group said that the mass would turn the dead woman into a posthumous lesbian. – Source

5. A man in Nebraska is breeding red cows and sending them to Israel in hopes of a pure red heifer being born there; such an event will allegedly prompt Jews to build a Third Temple, which fundamentalist Christians believe will usher in Jesus’ Second Coming. – Source

6. In Rome, the ancient temple where Julius Caesar was murdered is now a sanctuary for hundreds of cats. – Source

7. In Kyoto, Japan there are five temples that have blood-stained ceilings. They use the floorboards from a castle where warriors killed themselves after holding off against an army for eleven days. You can still see footprints and outlines to this day. – Source

8. There was a custom in ancient Babylon compelling all women at least once in their lives to go to the temple of Aphrodite and have sex with a stranger. – Source

9. The 1st Tenet of the Satanic Temple is “One should strive to act with compassion and empathy towards all creatures in accordance with reason.” – Source

10. A 3500-year-old Egyptian temple dedicated to Montu – God of strength and war was disassembled in the 19th century to build a sugar factory. – Source

12. There is an ancient temple in Ireland that predates Giza and Stonehenge. During the winter solstice, light penetrates through to the burial tomb for about 19 minutes. – Source

13. The Leaning Tower of Pisa has a sister in India named the Leaning Temple of Huma. While the edifice itself leans the pinnacle is perpendicular to the ground. – Source

14. The Padmanabhaswamy Temple in India has approximately $19 Billion worth of gold and precious stones kept in 8 on-site vaults. One vault is still unopened and what’s kept inside is still unknown. – Source

15. At the Sanjusangendo Temple in Japan, there is an annual competition to fire as many arrows through the temple as possible in 24 hours. The arrows can’t hit the floor, walls or the ceiling. – Source

16. In Russia, there is a “Temple of All Religions” which serves as a peaceful combination of different cultures. – Source

17. There is a fire in a Kyoto temple that has been perpetually burning for over 1200 years. – Source

18. In 1285, a Buddhist nun opened the Shōkozan Tōkei-ji temple as a refuge for battered wives. Women were considered divorced after living there for 3 years. – Source

19. The ancient Ta Prahm Temple has a sculpture that resembles a stegosaurus. – Source

20. There’s a 5000-year-old underground temple in Malta that was discovered by accident containing 6000 skeletons. – Source

21. The Temple of Olympian Zeus was under construction for over 600 years before being finished. – Source

22. Almost all of Japan’s Buddhist temples supported the country’s militarism during World War II. They believed it necessary to bring dharma to Asia. In order to make the wars seem just Japanese Buddhists took the work of a famous Buddhist preacher and edited it 208 times. – Source

23. There is a temple in Thailand that cares for Tiger and has trained them to only eat cooked meat and to be friendly to tourists. – Source

24. The tallest statue in the world is in China, is a statue of Buddha, nearly twice as tall as the Statue of Liberty and almost four times taller than Christ the Redeemer in Brazil. – Source

25. Century old Japanese temples were made without any nails or screws instead they were constructed with interlocking pieces like a puzzle. – Source

26. The paired statues outside Buddhist temples are actually carved pronouncing the sacred syllable “Aum”, each statue mouthing part of the word. – Source

27. The largest Satanic temple in America is in Detroit. – Source